Cannabidiol, commonly known as CBD, has been used by societies for millennia due to its health benefits, especially those related to its physiological, biochemical, and psychological properties. As such, this molecule has been increasingly tested as a supplement option for athletes, and the preliminary evidence seems to be quite positive.

Contents show
1 Is CBD approved for usage by athletes?
2 Which are the benefits of CBD for athletes?
2.1 Pain relief
2.2 Alternative to non-steroidal anti-inflammatory drugs (NSAIDs)
2.3 Anti-inflammatory results
2.4 Acts against GI distress
2.5 Increased sleep quality
3 What is the conclusion?

Is CBD approved for usage by athletes?

Since 2018, the World Anti-Doping Agency has removed CBD from its List of Prohibited Substances & Methods in Sports, which opens up the doors to the sportspeople who are interested in taking benefit from this safe and well-tolerated substance.

Moreover, Cannabidiol in Ireland is now readily available in different locations. All across the world, the products are being sold in pharmacies or specialised shops, both physical and online.

Which are the benefits of CBD for athletes?

CBD works as an anti-inflammatory, has neuroprotective benefits, analgesic properties, and acts as an anxiolytic. These qualities allow for athletes to recover faster in case of traumatic injuries, as well as protects against muscle and gastrointestinal inflammation. Let’s have a more detailed look at each of its health-related properties:

Many studies have linked the cannabis plant to positive effects with regard to pain reduction and control, including musculoskeletal issues developed through physical exercise. Other skeletal issues, such as stiff or painful joints, also seem to see improvement through the use of cannabis-based products.

While there is still little research on the long-term impact of CBD on pain relief, many athletes have admitted that Cannabidiol does have positive effects on their pain management.

For decades, athletes have been using over-the-counter NSAIDs in order to combat their pains, being the most popular ibuprofen and naproxen sodium. Sadly, these drugs may not be as safe or healthy as people once thought. In fact, long-distance athletes have been advised for years to avoid using NSAIDs throughout training and events, as these may cause renal damage.

Moreover, the long term use of these drugs will increase the risk of cardiac and vascular issues, such as heart attacks and strokes. Contrarily, CBD and other cannabis-based products, have similar effects on pain relief and have been deemed safe for consumption in both short and long terms.

More Reading: How Does CBD Affect the Brain? 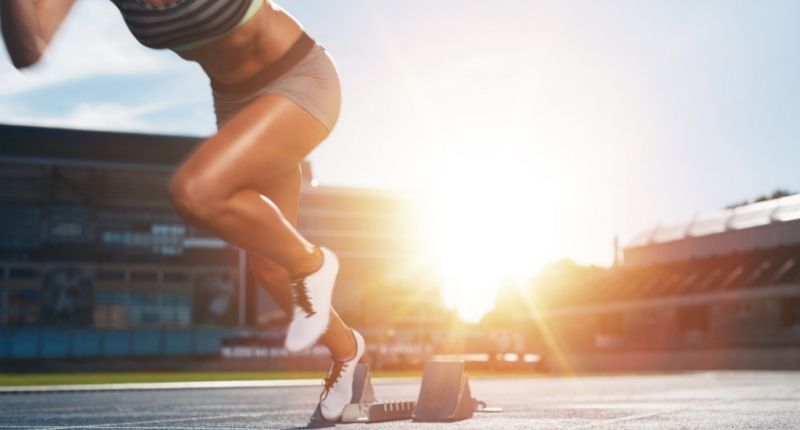 Athletes can benefit from a small level of inflammation, which helps to increase the positive adaptations to training. Unfortunately, when there is too much inflammation, physical recovery is delayed, and performance is therefore hindered. CBD has been proved to decrease inflammation, due to its interaction with a core component of the Endocannabinoid receptors in the brain and immune system. Receptors are proteins which are attached to the cells that receive chemical signals from different types of stimuli and thus help the cells react according to said stimuli. In the case of CBD, the response of the cells creates anti-inflammatory and anti-anxiolytic effects.

One of the main issues that endurance athletes face, especially in races, is the discomfort caused by the inflammation of the small and large intestines, commonly known as GI distress. While CBD will not have any effect on GI problems caused by dehydration or overheating, it will have a positive impact on decreasing the symptoms of inflammation that occurs during or after training and competitions.

One of the most effective ways for athletes to achieve training gains is through longer and better sleep. According to preliminary studies, CBD has a positive effect on sleep and one study, in particular, found that, when compared with 5 mg of a placebo drug for insomnia, 40, 80, and 160 mg of CBD had the same effect.

One of the possible motives for why CBD works the same way as an insomnia drug is its ability to inhibit the re-uptake of adenosine triphosphate (ATP). Your brain burns carbohydrates for energy, thus making adenosine gradually accumulate in the brain. Adenosine binds to neurons and through that process slows down brain activity and increases the feelings of calmness and sleepiness.

The body then metabolizes adenosine while sleeping and, once the concentrations of this organic compound decrease in quantity, your body will slowly wake up. CBD binds to the same receptors of adenosine, thus inhibiting the re-uptake of this compound, allowing it to be accumulated faster and making the body feel sleepier quicker.

Moreover, CBD has also been used as an anti-anxiety substance, which can help people who suffer from this issue have a more relaxed and restful sleep.

What is the conclusion?

CBD seems to be one of the best and healthier options for athletes who want to improve their recovery and performance, and who need pain-relief during training and competitions.

It has proved to have great potential in the development of athletic performance, as well as aiding sportspeople to reduce their consumption of drugs that have far more risks.